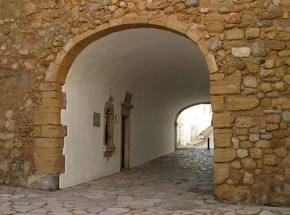 Oratory built in the 1940s to perpetuate the memory of the Saint Patron of Lagos who was born in 1360, according to tradition, in a house located near Portas do Mar, in the place where his niche and image is today.

As a young man he goes to study in Lisbon, where he decides to enter the Order of the Hermits of S. Agostinho. He studied theology and devoted himself to catechesis and preaching, always interested in the well-being of the people and supporting the poor. There he gained fame as a saint, for the good and the miracles he did, both in life and after he died. São Gonçalo de Lagos died in Torres Vedras, on October 15, 1422. In 1778 Pope Pius VI authorized the cult of the “Blessed” or Blessed, to Friar Gonçalo de Lagos, with honors from Saint in Portugal.

On October 27, Lagos celebrates its municipal holiday, in honor of its illustrious son and patron.