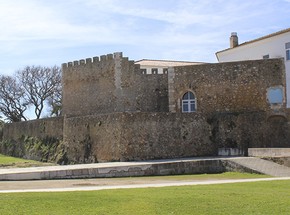 Castelo dos Governadores, also known as Castelo de Lagos and probably Paço do Infante D. Henrique, is a property built in the second half of the 15th century, which local authors refer to as having Arab origins.

The Castle is part of the so-called Medieval City Fence, whose construction began in the 14th century and lasted until the end of the following century.

As part of the construction of the second fence in Lagos, the Renaissance Fence, started in the mid-16th century, a bastion was added to it, as documented in the anonymous plan of 1554-1555, attributed to Miguel de Arruda, which constitutes the oldest drawn document of the fortifications of the City and project of this second fence.

After 1581, the Castle was transformed into the residence of the Governors of the Algarve, and works were carried out to adapt this space.

In 1850 the land and remains of the built complex, partially ruined by the 1755 earthquake, were transferred to the Misericórdia de Lagos, which, from 1885, adapted it to Hospital.

In 1960, within the scope of the works carried out for the Commemorations of the V Centenary of the Death of Infante D. Henrique, Avenida dos Descobrimentos was built and the Bairro da Ribeira was demolished, and part of the Castle was also demolished, giving it the image it currently has.