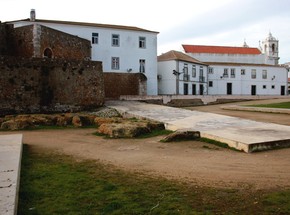 Between the Castelo dos Governadores and the old Casa da Dízima there were two doors that, articulated with the 16th-century wall and functioning as an antechamber of the city, allowed the circulation between walls and access to Cais da Ribeira.

The area where different wharves may have existed at different times, and which was buried in the 40s of the 20th century for the construction of Avenida da Guiné, is now visible and integrated into the requalification of the Ribeirinha front, under the POLIS program.